Glimpses of the Khanqah of Gangoh

Within the Deobandi fraternity and those Sufi chains that go through them, reading the biographies of the elders of Deoband is something that is often stressed.

These books, written in Urdu, are fantastic resources that enable readers and those treading the Sufi path to familiarise themselves with the temperament of the Deobandi elders and their mode of Sufism that is firmly grounded in adhering to Sacred Islamic Law (Shari‘ah wa Tariqah). They also provide readers with exemplars of the Prophetic way who lived not so long ago and who one can aspire to emulate.

Those connected to Shaykh al-Hadith Mawlana Muhammad Zakariyya Kandhalwi, for instance, are often told of the importance of reading the various biographies of leading Deobandi scholars. Necessary reading in this respect include Tadhkirat al-Rashid, Tadhkirat al-Khalil, Naqsh-i-Hayat and Aap Biti.

The first of these, Tadhkirat al-Rashid, is the biography of one of the leading scions of the Deobandi fraternity, Mawlana Rashid Ahmad Gangohi (1826-1905) written by one of his leading murids Mawlana ‘Ashiq Ilahi Mirathi (1881-1941).[1] Mawlana ‘Ashiq Ilahi himself was a prolific writer, translator and book publisher who owned the Khayr al-Matabi‘ publishers in Meerut. His biography of Mawlana Gangohi is a fantastic and intriguing account of a truly unique individual who could be said to be the bedrock of Deoband, an individual who combined the exoteric Islamic knowledge of hadith and Hanafi fiqh with the esoteric knowledge of Sufism according to the Chishti Tariqah. 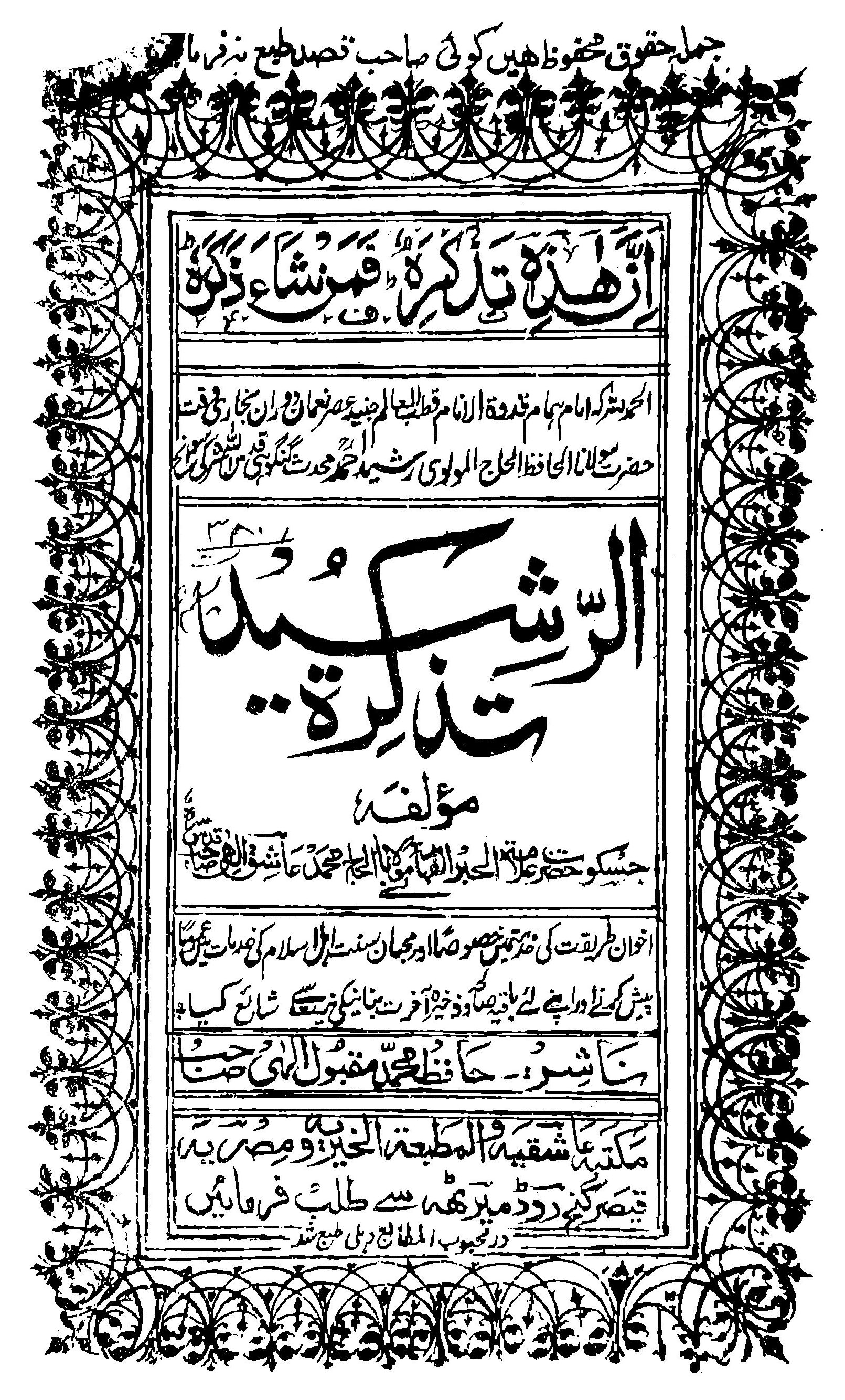 Written a few years after Mawlana Gangohi’s passing and published in 1908, Mawlana ‘Ashiq Ilahi was particular in also including photographs of Mawlana Gangohi’s khanqah. A fellow murid and photographer from Delhi called Haji Ahmad Mirza took on this task and it seems several photographs were taken, but not all published in the biography. After all, a picture is worth a thousand words and the aim was to clearly capture the moment and provide readers with an opportunity to see the khanqah as it was over 120 years ago.

With the book republished several times using facsimile versions of earlier prints, publishers omitted these photographs, probably due to the quality of images decreasing over time. However, the references to the images remained in the body text. For example, the version widely available in the United Kingdom today is a Pakistani facsimile print published by Idara Islamiyyat that includes none of the photographs that were in the original print. This is also the case with pdf versions of the book available on Archive.org.

It was an Idara Islamiyyat version of the biography that I read over twenty years ago and I recall my regret at the time at not being able to see these photographs. As a result, I recently contacted Mawlana Muhammadullah Khalili Qasmi, a graduate of Darul Uloom Deoband, to see if he could source the photographs in any old versions of the book in the library at Deoband.  The mawlana very kindly searched for these images and shared a series of photographs that were included in the original Tadhkirat al-Rashid published in 1908 by Khayr al-Matabi‘ in Meerut. These photographs  are part of our heritage and I have personally found them intriguing and useful and so felt the need to share them online for the benefit of others. I have also taken the liberty to translate two passages in the book in which Mawlana ‘Ashiq Ilahi describes the pictures.

Photograph 1 – The Courtyard of the Khanqah 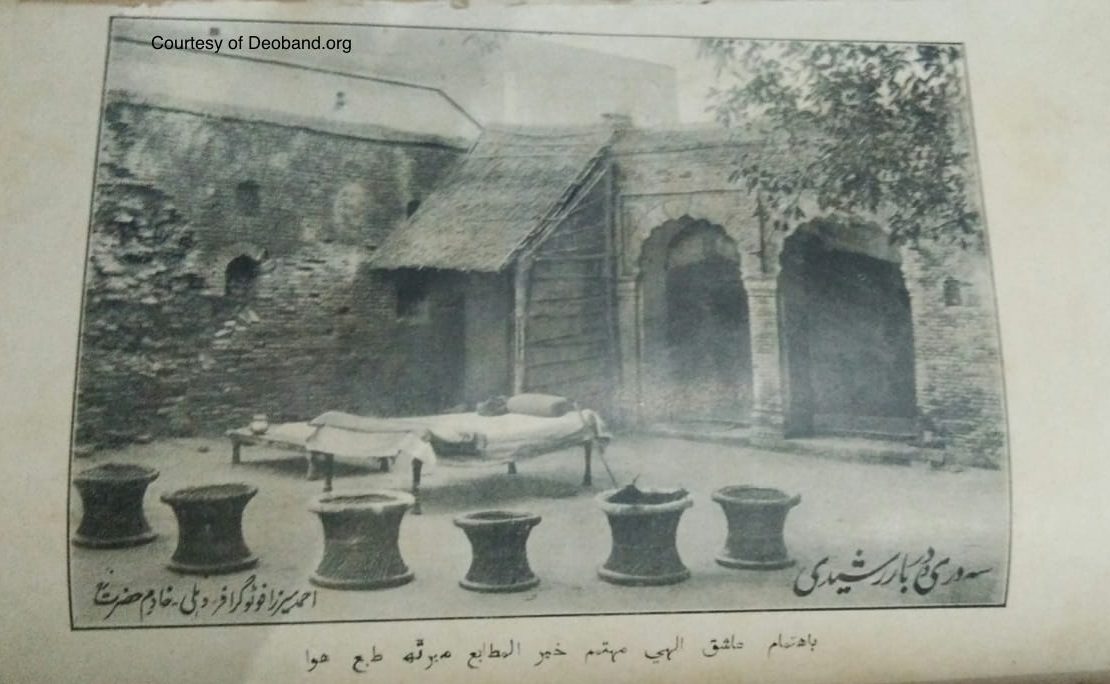 Come, let us see that seh-dari (three-door room) in which several hundred scholars gathered flowers in this flowerbed of religion. It is regretful that this garden of knowledge whose gardener has left the world is today desolate. The situation of the building is exactly what it was in the time when teaching was carried out here. It is, however, regretful that the master is no longer present through whose breath light and freshness fell on each stone. It has been felt apt for Hadhrat’s students specifically and readers in general that this situation that shall soon disappear is photographed so that they may view this sight that is now difficult to view.

The charpoy located in the courtyard of the khanqah is in its place. The bed has been laid out and close to the pillow is the pure turban [of Mawlana Gangohi]. The staff is standing towards the head side [of the charpoy]. The blessed slippers are under the charpoy’s middle panel and his clogs are placed at the middle door. There are stools on all four sides. There is a chowki (raised wooden platform) in the direction of the qiblah with a prayer mat laid over it. There is also a jug for wudu. The Ishraq prayer in the morning would be performed here. In the evening, this was where court would be held.

It is regretful that the farm is now deserted, the birds have flown away, its ripe harvests have come to an end, its flowers have been taken, the birds who sang in the morning and those who chirruped in different melodious modes have continued on with their journey.

We have endeavoured to place everything in its correct place. The seh-dari is that lecture room (daras-gah) where the above-mentioned teaching of Sacred Knowledge took place. May the Most High grant success in both worlds to Haji Ahmad Mirza, the photographer, who has expressed the passion of his servitude to Hadhrat through his art and also fulfilled my desire. (Tadhkirat al-Rashid, part 1, p. 198/199)

Come, let us allow you to see the inside of that room known as the Hujrah-i-Quddusi which was plastered and cleaned with Hadhrat’s blessed hands. It was in this room that Mawlana [Khalil Ahmad Saharanpuri] Ambethawi gave his bay‘ah in the silsilah. It was this khalwat-khanah (place of solitude) that remained Hadhrat Mawlana’s place of worship for approximately fifty years. It was in this room that a reptile stung him that made him ill and led to his death. It was in relation to this room that he underwent the trial in which the pir-zadehs disputed with him. (Tadhkirat al-Rashid, part 1, p. 242/243)

[1] After his shaykh’s demise, Mawlana ‘Ashiq Ilahi developed a Sufi relationship with Mawlana Khalil Ahmad Saharanpuri (one of Mawlana Gangohi’s leading khalifahs) and received ijazah in the Tariqah from him. He also remained a patron of Madrasah Mazahir al-‘Ulum in Saharanpur. Aside from his biography of Mawlana Gangohi, Mawlana ‘Ashiq Ilahi also wrote a biography of Mawlana Saharanpuri called Tadhkirat al-Khalil and translated from Persian a primer in Sufism called Imdad al-Suluk (also known as Irshad al-Muluk).

Views expressed by our writers are their own and do not necessarily reflect Basair.net’s stance.