A Sufi commentary of Sahih al-Bukhari

It was while studying the final two years of hadith at Dar al-‘Ulum Bury in the late 1990s and early 2000s that I came across an advert in the back of an Urdu book advertising Intikhab-i-Bukhari Sharif—a Sufi commentary of Imam al-Bukhari’s Sahih.

The idea of a Sufi explanation of the most authentic and accepted collection of hadith immediately caught my attention. The advert mentioned that the Urdu was a partial translation of an Arabic commentary entitled Bahjat al-Nufus by the Maliki Andalusian hadith expert and Sufi Hafiz Ibn Abi Jamra (d.1300). What made this edition more interesting was that the translation had been carried out under the supervision and instructions of Hakim al-Ummah Mawlana Ashraf ‘Ali Thanwi (d.1943). The person asked to translate was one of Hakim al-Ummah’s leading khalifahs, Mawlana Zafar Ahmad ‘Uthmani (d.1974) who was also the khalifah of Mawlana Khalil Ahmad Saharanpuri (d.1927).

“This invaluable book on issues of traversing the Sufi path (suluk) and Tasawwuf, matters relating to manners and etiquettes, and issues of fiqh derived from the noble hadith has enjoyed the focus of Sufi scholars and pious individuals in each era by consensus. This is a matchless commentary on selected hadiths of Sahih al-Bukhari,” the advert mentioned.

I was hooked and began searching high and low for this book, but with little luck. It was only years later in 2007, while attending one of Shaykh Mawlana ‘Abdul Hafiz Makki’s (d.2017) i‘tikaf programmes in Faisalabad, Pakistan, that I discovered a copy at Maktabah-i-Kashmir. This was a bookstore that no longer exists but at the time was run by Mawlana ‘Abdul Hafiz’s relatives and located in the city’s Chiniot Bazar, close to Faisalabad’s famous British-era Clock Tower (ghanta ghar). In this way, I became the proud owner of this treasure of a book, and that also an old handwritten copy (not one of the modern typed ones) published in 1980 by Lahore’s Idara-i-Islamiyyat.

The story of Intikhab-i-Bukhari Sharif really begins with the Hafiz of Hadith Ibn Abi Jamra, a hadith expert and Sufi who was a descendant of the Companion Sa‘d bin ‘Ubada al-Ansari (may Allah be pleased with him). Born in Murcia, Spain, his full name was Abu Muhammad ‘Abdullah ibn Sa‘d ibn Sa‘id ibn Abi Jamra al-Azdi al-Andalusi. The great polymath Imam Jalal al-Din al-Suyuti (d.1505) mentions Hafiz Ibn Abi Jamra in his book Husn al-Muhadarah fi Akhbari Misr wa al-Qahirah (Excellent Lectures on the History of Egypt and Cairo) in a section regarding the ascetics, Sufis and pious who resided in Egypt. Hafiz Ibn Kathir (d.1373) described him as someone who spoke the truth and commanded righteousness and forbade wrong.

Shaykh Ahmad Baba al-Timbukti (d.1627) also includes Hafiz Ibn Abi Jamra in Nayl al-Ibtihaj bi Tatriz al-Dibaj (a compendium of biographies of Maliki scholars in Andalusia, and North and West Africa down to the end of the 16th century). In there he is described as the friend of Allah (wali), the exemplar (qudwah), the knower of Allah (‘arif billah), the ascetic (zahid), the pious (salih), the imam, the most knowledgeable (‘allamah), and the famous reciter (al-muqri al-mashhur). He also quotes Hafiz Ibn Abi Jamra having once said that he never disobeyed Allah even once, something indicative of his deep sense of spirituality and consciousness of Allah.

Shaykh ‘Abdul Wahhab al-Sha‘rani (d.1565), the famous Egyptian scholar and Sufi, mentions Hafiz Ibn Abi Jamra in his Al-Tabaqat al-Kubra (The Supreme Levels). In there, he writes that Hafiz Ibn Abi Jamra took up residence in Egypt, that he was someone who held firm to the Sunnah, was steadfast in worship, known for his sincerity and ever readiness for death, and was someone who kept away from people except when attending gatherings. He adds that some people went against him when he said that he would see the Prophet (may Allah bless him and grant him peace) in a state of wakefulness and spoke to him. Due to the opposition, he confined himself at home until his death and was subsequently buried in Cairo’s Al-Qarafa (City of the Dead), near the grave of Shaykh Ibn ‘Ataullah al-Iskandari (d.1310), the author of Al-Hikam al-‘Ata’iyyah.

Shaykh ‘Abdul Wahhab also mentions that in Cairo, Hafiz Ibn Abi Jamra established a Sufi lodge (zawiyah or khanqah) close to Jami‘ al-Maqsam, something that shows that he was an individual who combined both the outward and inward sciences (zahir and batin). When reading this, I was immediately reminded of our very own scholars of Deoband who, while being expert scholars were also dedicated Sufis. The likes of Imam Rabbani Mawlana Rashid Ahmad Gangohi (d.1905) come to mind who for many years taught the complete Six Books of Hadith (the Sihah Sittah) alone by himself while sitting in his khanqah in Gangoh. Shaykh ‘Abdul Hafiz Makki writes in his introduction to Al-Kanz al-Mutawari that Mawlana Gangohi dedicated his entire time to teaching the Six Books of Hadith following his return from his second Hajj in 1299H (circa 1881) until he developed an eye condition in 1313H (circa 1895). As an accomplished Sufi guide, the final 10 years of his life until his death in 1905 was dedicated to guiding and purification (irshad wa tazkiyah).

Hafiz Ibn Abi Jamra admired Imam al-Bukhari’s Sahih—regarded as the most reliable book after the Qur’an—and it was this admiration that compelled him to abridge it. This was done by reducing the chains of narration (isnad) to the first narrator and removing recurring hadiths. The outcome is a collection of 296 hadiths which he then named Jam‘ al-Nihayah fi Badi al-Khayr wa al-Ghayah (The Gathering of the End in the Beginning of Goodness and the Aim).

While living in Jeddah in the 2000s, I heard that the great contemporary hadith expert Shaykh al-Hadith Mawlana Muhammad Yunus Jawnpuri (d.2017), one of the senior khalifahs of Shaykh al-Hadith Mawlana Muhammad Zakariyya Kandhalwi (d.1982) who was also known for his Sufism, praised an edition of Hafiz Ibn Abi Jamra’s Mukhtasar that had then been recently published by Jeddah’s famous publishing house Dar al-Minhaj. Located in the al-Kandarah district of the city, close to the Bab Makkah area of old Balad area, acquiring a copy from Dar al-Minhaj was easy. Shaykh Yunus’ praise was not unfounded. This was a beautiful edition indeed. Dar al-Minhaj had published a unique edition of the book with additional footnotes from Hafiz Ibn Hajar’s Fath al-Bari and the commentary of the Egyptian Azhari scholar ‘Allamah ‘Abdul Majid al-Sharnubi (d.1340H).

In his introduction to the Mukhtasar, Hafiz Ibn Abi Jamra mentions that his impetus for carrying out the abridgement was to secure the glad tidings mentioned in hadiths for those who spread hadith. He also desired to produce a collection of hadith that people could easily memorise and selected Sahih al-Bukhari due to its authenticity, the piety of its author and due to him being someone whose prayers were accepted and who had supplicated for the readers. 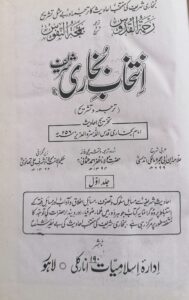 Hafiz Ibn Abi Jamra then wrote a commentary of his abridgement called Bahjat al-Nufus wa Tahalliha bi Ma‘rifati ma laha wa ma ‘alayha. In his introduction Mawlana Zafar Ahmad ‘Uthmani writes that what really lends credence to his reliability in hadith is the way in which the brilliant hadith scholar Hafiz Ibn Hajar al-‘Asqalani (d.1449) quotes him in Fath al-Bari, his monumental and celebrated multi-volume commentary of Sahih al-Bukhari.

Having come across Intikhab-i-Bukhari Sharif, I had been after a copy of Bahjat al-Nufus for several years. It was only by chance that during a recent visit to the coastal Turkish city of Yalova in August 2022 that I stumbled on a non-critical (ghayr muhaqqaq) edition. Costing a humble 100 Turkish liras (£5), I was elated. Having tweeted about my find, I have since come to learn that a critical edition is to soon be published by Dar al-Rayyahin, a publishing house with offices in Beirut and Amman.

What makes Hafiz Ibn Abi Jamra’s commentary of particular interest is the Sufi interpretation of hadiths. He presents the inward spiritual meaning in addition to the outward or apparent meaning. It was this that caught the attention of Hakim al-Ummah Mawlana Ashraf ‘Ali Thanwi. Mawlana Zafar Ahmad writes that Hakim al-Ummah drew Bahjat al-Nufus to his attention saying that it is an excellent book and that it is his heartfelt desire that it is translated into Urdu.

Mawlana Zafar Ahmad’s translation is brilliant. However, as he only had access to two volumes of Bahjat al-Nufus, unfortunately his translation only covers the first 100 hadiths of the book. There are some differences between the Urdu translation and the Arabic. While Hafiz Ibn Abi Jamra provides commentary of hadith from both the outward (zahiri) and inward (batini) aspects, Mawlana Zafar confines himself to only translating commentary relating to Tasawwuf. What is of specific interest are the additional notes that Mawlana Zafar Ahmad sporadically adds after Hafiz Ibn Abi Jamra’s commentary under the letter fa (for fa’ida) in which he provides brief but useful pointers on Tasawwuf, specifically on the pristine Sufi methodology of Hakim al-Ummah Mawlana Ashraf ‘Ali Thanwi.

For me, the story of Intikhab-i-Bukhari Sharif began over 20 years ago at Dar al-‘Ulum Bury when I came across an advert in the back of an Urdu book. I am now the proud owner of not just the two volume Intikhab-i-Bukhari Sharif, but also Hafiz Ibn Abi Jamra’s Mukhtasar and Bahjat al-Nufus. What I find of particular interest is the way the scholars of Deoband combined Tasawwuf with the study of hadith, examples of which can be found in scholars of bygone times.